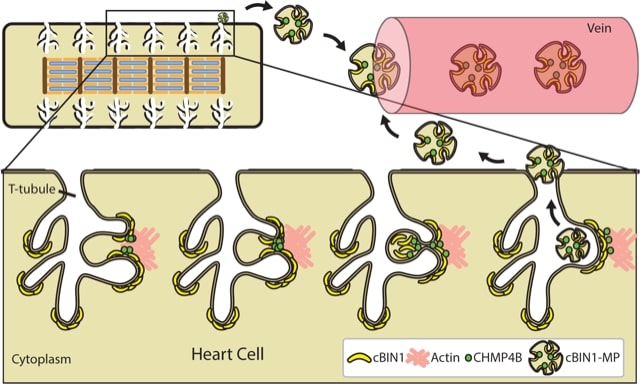 Cardiac bridging integrator 1 (cBIN1) score (CS), has recently been introduce as a diagnostic and prognostic biomarker of heart failure (HF), in patients with HF with preserved ejection fraction (HFpEF)1 and HF with reduced EF (HFrEF)2. cBIN1 is a cardiac-specific transverse tubule (t-tubule) membrane scaffolding protein, which functions to organize microdomains responsible for calcium release and excitation-contraction (EC) coupling3,4. cBIN1 transcription is decreased in failing human hearts5,6, impairing EC coupling and myocardial function. Furthermore, cBIN1 is released from cardiomyocytes into circulation7 and the resultant cBIN1 blood level7-9 correlates with its content in myocardium. CS is a biomarker derived from the inverse of plasma cBIN1 level1, which rises with worsening HF and prognosticates in stable, ambulatory HF patients, independent of volume overload1,2.

The Sarcotein cBIN1 Score (CS) Quantitative ELISA is a sandwich ELISA assay for detection and quantitation of levels of cBIN1 in plasma. The assay is performed on an ELISA platform which uses commercially available mouse monoclonal anti-BIN1 exon 17 capture antibody coated onto the wells of microwell plates. Upon addition of a diluted test specimen containing cBIN1, immune complexes are formed through the interaction between cBIN1 antigen in the specimen and anti-BIN1 antibodies coated on the microwells7.The specimen is aspirated following incubation, and microwells are washed with the buffer. Next, conjugate containing horseradish peroxidase (HRP)-labeled Sarcotein recombinant anti-BIN1 exon 13 detector antibody, is added to all microwells. HRP-labeled anti-BIN1 antibodies bind to any BIN1 antigen captured on the solid phase. A blue color is produced after an aspiration and wash to remove excess conjugate and incubation with TMB (Tetramethylbenzidine) substrate. With the addition of a phosphoric acid solution, the enzyme reaction is stopped and changes the substrate color to yellow. The amount of cBIN1 antigen present in specimens is quantitatively proportional to color intensity, which can be read on any ELISA reader. A recombinant cBIN1 standard is used to generate a standard curve for cBIN1 antigen. Results of the ELISA will be used to quantitate the cBIN1 antigen in EDTA plasma specimens.